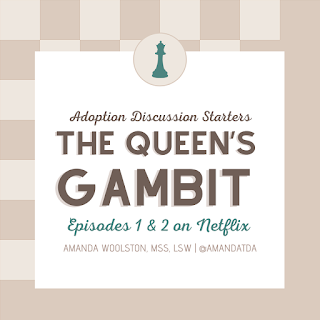 Warning! There are spoilers for episodes 1 and 2 of The Queen's Gambit ahead. These episodes also contain sensitive content including: death, adoption, substance use, orphanage life, racism, sexism, mental illness, & suicide.

There is a need for deeper discussion that includes the adopted identity of the main character of this hit Nextflix series. After watching the first two episodes (thus far) as an adult adoptee and clinician, I developed a series of questions for individual use or to stimulate conversations in families and clubs gathered to discuss the episodes. These questions guide developmentally, historically, culturally, and adoption-sensitive dialogue about episodes 1 & 2 of The Queen’s Gambit on Netflix. They are intended for individuals 16 and older.

Question One: How might our brief glimpse into Beth’s first mother’s seemingly tormented mindset and her published book (as a PhD) in mathematics inform us about Beth’s own mental health and mathematical gifts?

Question Two: How does Jolene help girls in the orphanage adjust? How does she help the audience adjust to confusing aspects of orphanage life? How does institutionalized racism play a role in how much Jolene gives to others beyond the good she receives in return?

Question Three: During Beth’s pre-adoption interview, she is encouraged to say that she is younger than she is. Agencies were able to do this because Beth's birth certificate would be sealed before her adoptive parents could ever get a chance to see it. An amended birth certificate would be issued in its place which would display her adoptive parents as though they are her birth parents. There is historical evidence that details could be altered from one version of the birth certificate to the next. This would mean that Beth would now have no proof of her real birth date, and her parents would never know the adoption agency lied. This practice of amending and sealing started in the 1930's persists to this day in the majority of U.S. states. What vulnerabilities, past and present, do you think this practice creates for adopted people?

Question Four: What does Beth lose when she is adopted? (people, places, belongings, aspects of identity, routines, access to objects of her interest). What does she gain? What is she able to carry through with her from birth through adoption thus far?

Question Five: Adopted, orphaned, and fostered children are often painted as liars, thieves, and “behavior problems.” Jolene yells and acts out. Beth steals and lies. How can we empathize with why? Does understanding their perspective in this way help you refrain from labeling and stereotyping?

Question Six: Beth’s adoptive mother wants to lie about her divorce so that she and Beth don’t have to lose each other. How can empathy towards preserving Beth’s adoptive family apply to other families? For example: apply this to Beth’s father who was not considered when her first mother died?

Question Seven: What do these first episodes inform you about race, gender, age, and ability/disability (ie behavior) and their role in the “adoptability” of children? What do you think it meant to children to be told they are “lucky” to be adopted, in light of these factors?
Question Eight: During Beth’s childhood era, it was common to expect adopted children to be companions to their parents and not full family members. Today, children are often expected to immediately begin seeing themselves as full family members upon adoption. How can centering on a child’s perceptions better shape these expectations?

Question Ten: Around the age where Beth learned chess, most of us develop a talent we practice throughout adolescence. Skills from nurturing this talent are then used in the working and family life in our adulthood. What talent did you develop at this age? Were you ever restricted from your talent as a punishment? Do you think this way of punishing Beth for stealing pills was fair?
Thank you for reviewing this list of questions. I hope they will provide you and your loved ones with stimulating insight and conversation surrounding these episodes. Please come back next Saturday for more questions covering more episodes.
Read more! »
on November 28, 2020
Email ThisBlogThis!Share to TwitterShare to FacebookShare to Pinterest
Labels: adopted, adoptee, Adoption, book club, chess, class discussion, classroom, discussion, family, netflix, orphan, orphanage, prompts, the queens gambit, watch party

Amanda Woolston
I began blogging in 2009 to try to find my original family and ended up becoming an author and activist for the adoption community. Two degrees in social work, two kids, multiple legislative campaigns, multiple published books, two collegiate teaching positions, a clinical practice, and advanced licensing later....I'm still at it and not giving up any time soon.
Older Posts Home
Subscribe to: Posts (Atom)