Showing posts from August, 2020
Show all

This Adult Adoptee Takes Down that Abby Johnson Video 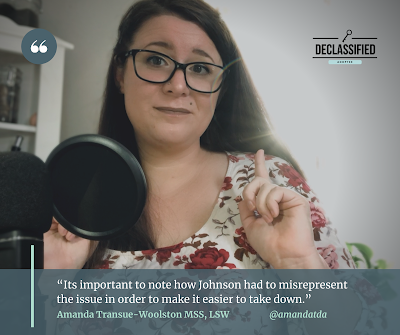 “I haven't known if I should talk about this or not.” With these words, Abby Johnson began a 15 minute YouTube video on police brutality. Johnson is a former Planned Parenthood director turned pro-life activist. She is also an adoptive mother to a black son. I decided to watch her video with an earnest desire to hear her thoughts. As adoption is my wheelhouse, I need to know what an adoptive parent with a major platform thinks about an issue. I especially need to know how they may influence other adoptive parents because this, in turn, impacts adopted children. I was willing to put aside my fundamental disagreement with the ways in which she discusses abortion in hope that she, as the white mother of a black child, might use her platform to condemn police brutality toward black Americans. To say I was disappointed would be an understatement. I immediately began writing a blog post about what it feels like to be an adopted person whose reality plays second fiddle to their pro-life
Read more
More posts