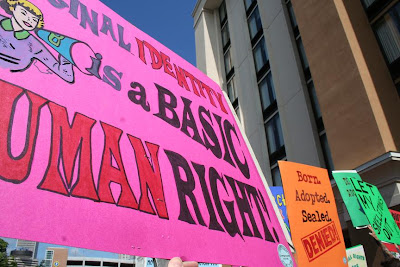 Tap, Tap, Tap, is this Thing On? CNN Features Adoptee Issue but Forgets to Invite Adoptees to the Table 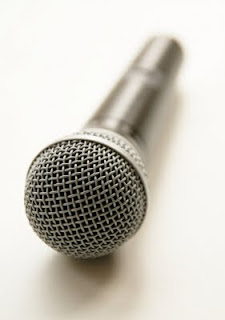 I am glad that Adoptee Rights was given some real visibility on CCN TV with Don Lemon.  However, I am disappointed that an adult adoptee was not asked to be present for the interview.  Once again, adoptees were not given a place at the table.  This has become the norm in adoption.  Although some of my adoptive parent friends are some of my favorite people ever, they will tell you themselves that adoptive parents cannot be the only member of the adoption system invited to speak on adoption.  Adoptive parents and agencies are too often the only people invited to speak about adoption.  Shouldn't those who live out being adopted everyday of their lives be invited too?

On SmartTalk Radio, PA Senator Greenleaf was interviewed with Mary Robinson, former CEO of the NCFA, and Adam Pertman, Executive Director of the EBD Adoption Institute. Represented between the three of them were adoptive parents, policy makers, and institution stakeholders.  Absolutely no one was invited to speak from the original parent or adult adoptee perspective on an issue that specifically impacts adult adoptees and original parents the most.

On WHYY (Philadelphia), Adam Pertman and Professor Anita Allen from U. of Penn (a lawyer, law professor, and adoptive parent) were interviewed on Adoptee Rights.  Again, there was not one original parent or adult adoptee present to speak on the issue.

Today, on CCN, Adam Pertman, Chuck Johnson of the NCFA, and Jennifer Yurfest (and original mother from CUB) were interviewed with  Don Lemon on Adoptee Rights.  Again, not one adult adoptee was present when discussing an issue about adoptees gaining equal access to their birth records.

We need to change this.  The population an issue impacts should be present to speak on the issue. All it takes is for someone putting a show together to realize this and ask us.  There is no shortage of well-spoken, qualified, educated, adoptee professionals to speak on adoption.

The CCN show went how you'd expect it to.  Pertman was presenting the facts about Adoptee Rights and the NCFA was spreading more unfounded falsities and stereotypes.  Both know adoptees and even employ adoptees but appeared on the show themselves rather than empowering an adoptee to do so.  The NCFA specifically claims to want to spread a "culture of adoption."  Perhaps this means a culture where adult adoptees do not exist.  We're the only member of the adoption system not currently listed in their mission statement, yet they're preferred over an actual adult adoptee to speak on adoptee issues.  What's wrong with this picture?

A transcript of the CNN show can be found here (starting at 26:42)

A Memory: When my Adoptive Family Went Broke 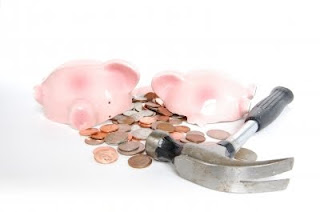 My adoptive mother recently asked me how I thought being adopted caused me to view certain life experiences differently growing up than another children might.  One vivid memory that I recall involved how I recalled how adoption had been explained to me, and how that explanation impacted how I viewed a family financial emergency.

When I was a young girl, I watched the short, Christian movie "Gerbert: Before my First Day Began."  The main character, Gerbert the puppet, learned he was adopted, just like he had adopted his stuffed lion named "Roary."  The lesson of the movie is that Gerbert had received a better life because his mother had put him up for adoption.

One day, in the very real world, my adoptive father had to leave our home for several months to find work.  In my  very young mind at the time, I started to worry that our impoverished state would mean I would have to be adopted again by someone else.  According to my understanding of adoption, original impoverished family had done the right thing by giving me up for adoption; now my new family was poor too.

My mother has always been stunned that I remember my dad needing to leave to work in another state so vividly because I was only six at the time.  We had never had a whole lot of money but I remember it being explained to me that my dad needed to leave to find work and that my mom and I would be staying put in our apartment.  I remember helping her hang plastic across the doorways of the rooms we couldn't afford to heat and carefully avoiding the large kerosene heater in the middle of the hallway when I needed to walk from one room to the other.  Dinners were simple, sandwiches, macaroni and cheese, hot dogs, to keep the grocery bill down.

I remember it so well because it was punctuated with a worry, a silent worry, that I have never told anyone about until now.  I remember being fully prepared to offer to eat store-brand macaroni and cheese for the rest of my life to help save money.  I searched my young mind for ways that I could help keep my family together.

How do you explain adoption to a child then, my mother wanted to know.  This is such a tough question as I now as a parent struggle with how I will explain being adopted to my own children.  I concluded by telling her I don't think there is any way to do an adoption or explain adoption to a child that wouldn't result in that child viewing life through a unique lens, having unique issues and thoughts, and having unique worries.  We simply be as sensitive as we can, learn a lot along the way, and offer support when it is needed.

My Op-Ed Response to the New Jersey, RTL, Bar Association, and ACLU on their Troubling Statements about Being Adopted 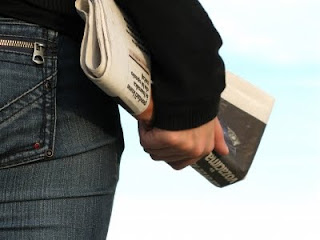 Regardless of what position you take on NJ's bill, I think we can all agree that the "coalition" (NJ Catholic Conference, Lutheran Office of Governmental Ministry in New Jersey, NJ ACLU, NCFA, NJ Bar Assoc, and NJ Right to Life) formed to oppose it is hitting nasty lows instead of sticking to the facts.  When they're not marching into access legislation hearings referring to adoptees as "stalkers," they're submitting Op-Ed articles like this one designed to mislead the public and strike more fear in the hearts of legislators and voters based on the stereotype that adult adoptees want to pass legislation that will lower adoption rates and raise abortion rates.

I submitted a rebuttal to the Trenton Times to the Op-Ed article, as did many of you, and we can only hope that they will print our comments.  However, in case they won't, I thought I would post it here as well.


The Op-Ed article published July 11th, 2010 about birth record access quoted study findings out of context, mentioning both abortion and adoption rates. It continued on to speak only about adoption rates, leaving readers to assume that if an adoption rate is going down in a state, then the abortion rate must be going up. However, the Adoption Institute study actually concluded that variability in the abortion rates and adoption rates in access states showed that birth record access has no impact—other social factors do. Adoption rates are going down likely because of the shift in the social climate towards unwed motherhood and improved resources for poor families. The given quote was about making correlations not claiming a “cause effect.”

When we see adoption rates going down, it is irresponsible to lead the public to believe that women are having abortions instead. The majority of women experiencing unplanned pregnancies that bring them to term choose parenting. I would hate to think that this coalition is actually complaining about declining adoption rates because more women are choosing to keep their children.

The Op-Ed authors have continuously framed their anti-access argument around the stereotypes that Adult Adoptees are “disruptive” and wish to pass legislation that will cause undesirable effects on abortion and adoption rates. I cannot fathom the logic that says treating Adult Adoptees equally will “ruin” adoption but defaming adoptees, the individuals adoption is supposed to be about, won’t.