Tyra Banks: the More Fees you Pay, the Better the Adoption? 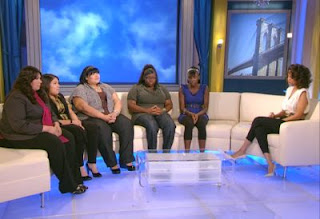 Today, Thursday, January 21, 2010, Tyra Banks did a segment called "Teenage Pimps."  The segment was about teenagers who pimp out other teenagers for money.  But adoption somehow made its way into the mix.

Awkwardly attached to the tale end of the show was the story of a former prospective adoptive couple who was scammed by an adoption lawyer.  Tyra introduced their portion of the show by listing famous couples who have adopted, musing that their adoptions must have gone smoothly because the celebrities had enough money to pay for the adoptions to go "smoothly."  She transitioned into introducing the couple by explaining how much they had spent: $60,000.  To Tyra, this was enough money for the adoption to, you guessed it, "go smoothly."

The adoption lawyer promised to them, and to 16 other couples, that there were two "birth mothers" ready to relinquish upon birth.  He promised they could adopt both babies for $60,000.

The couple said: "he preyed on our emotions."  They said that when it comes to adoptions "think with your head, not with your heart."

I feel badly for the couple.  I think it is terrible that they were scammed.  Overall, I found the show incredibly disappointing.  I thought that featuring them was an insensitive tie-in to the main theme of the show, "teen pimps."  This would have been a teachable moment for Tyra to explore the role of money in adoption.  Such as  how adoption fees allow couples in scam situations to be exploited because large fees have become the "norm" and unquestioned parts of adoption.  Also, how large fees are an enormous barrier toward establishing homes for children; yet, had the couple adopted through foster care, there would have been no fee at all.

Tyra could have covered the struggle of single parents and the irony of huge adoption fees in contrast to the number one reason why mothers choose adoption: a lack of finances and other resources.  But she didn't.  Viewers learned nothing today except that people should be able to pay a lot to have "good adoptions."  Best practices for the interests of children and all their various parents?  Perhaps she'll cover that another day.
on January 21, 2010
Email ThisBlogThis!Share to TwitterShare to FacebookShare to Pinterest
Labels: Adoption, adoption fees, Adoption Scam, Ethics, Tyra Banks