Adoption as a Pattern in Family Systems 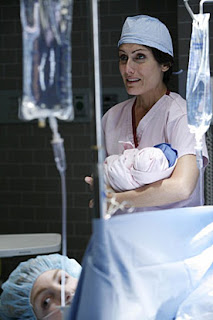 "Think of what you can do for this baby [by giving her up for adoption]," Dr. Cuddy says to the expectant mother in her care.  Dr. Cuddy, a character in the hit TV show House, some episodes back; she wanted to adopt an infant.  She had been matched with this young woman who ended up having serious complications and was admitted to the hospital of which Dr. Cuddy is the director.

After a dramatic and complicated medical ordeal (of course, it's House after all), the young woman decides to keep her baby.  Heartbroken, Dr. Cuddy reminds the woman why she wanted to choose adoption in the first place, to break the cycle of how her grandmother was a horrible mom to her mother and how her mom was a horrible mom to her, and give her own daughter to Dr. Cuddy to adopt.

I remember watching this when it first aired, before my reunion, and before I began to identify with the silent adoptee I had hidden inside of me.  I was on Dr. Cuddy's side; she was wealthy and could provide the baby with a good life.  The expectant mother was young, naive, poor, from a disengaged home, and I believe had a previous drug history.  Without realizing it, I likely had a negative affect towards her for those reasons alone; poor, young women carry many negative social stigmas.

I watched it again today as a re-run and saw it in a whole new light.  Young?  She'll grow older.  Naive?  Educate her.  Poor?  Help her find resources.  From a disengaged home?  Counsel her to find ways to not repeat the mistakes her family made.  A former addict?  Encourage her to stay clean; set her up with NA meetings.  I did not see anything that was stacked against her as an unsolvable problem like I did before.  I thought how I would feel if I were that young woman trying to make a decision.  I thought of the infant who shouldn't be separated from the only mother it has ever known if it is not absolutely necessary.

But it was probably the comment about "breaking the cycle" that got to me most.  One of my very first professors once said that some one's life path is chosen by two things (1) doing exactly what their parents did or (2) having awareness that their parents were wrong and choosing to use that awareness to make a positive change.  A more recent, and super-favorite, professor of mine noted that repeating negative patterns in a family can be bad thing...but so can being aware of them and doing the exact opposite.  Opposite isn't always better.  Opposite is...well, opposite.

My favorite passage of the Bible is Ecclesiastes chapter 7.  No one really knows the human author who wrote Ecclesiastes.  It is hypothesised that it was King Solomon, judging by the often weary tone of the book--something Solomon might have donned after gaining wisdom from God the easy way and then choosing to re-learn wisdom the hard way by making poor choices and bad mistakes.  I could not help but think of this passage when I was watching House today.  Chapter 7 is about wisdom and the meaning of life.  My favorite part is verses 15-17 when he talks about balancing good and bad.

"It's best to stay in touch with both sides of an issue. A person who fears God deals responsibly with all of reality, not just a piece of it" (verse 17, paraphrase by The Message).

It's not wise to go from one extreme to the other.  This young girl did not receive proper love and nurture from her own mother.  Suggesting that she go go the opposite extreme (making sure she wouldn't ruin her own daughter's life by choosing to sign away her rights) was not wise of those she was seeking support from to do, in my opinion.  Adoption is a permanent "solution" for all of her temporary problems.

Going to the opposite extreme might stop the current negative chain but it stands to make a negative chain of its own.  As I have said before, making a genogram of my adoptive dad's super-adoptee-filled family and comparing it to the genogram of my adoptive mom's non-adoptee filled family was so eye opening.  My mom's side was a neat...tree-looking thing.

My dad's genogram looked like a very complicated schematic of some type.  My grandmother and I are the two who are traditionally and legally adopted.  There are several other family members who live adoptee-like circumstances and lack of family permanence is a real issue for just about any branch you take off of this genogram.  Are there other factors?  Yes--there always are.  But I was able to make quite a case for adoption's impact in the project that I did.  It is not my purpose to blame adoption for every bad thing in life.  But it is not a perfect solution to everything that's wrong with no issues of its own either.

I realize this is TV.  But I am adopted and I live in the rest of the very real world like everyone else.  A world that watches TV, listens to radio, sees movies, and gazes upon advertisements.  I see the rest of the world that doesn't understand what it's like to live adoption portray it in all of these media sources, and when I see it, I have to internalize it and decide if its true for me or not.  And it usually isn't.  Rarely is there ever something out there that I can positively and realistically identify with as an adopted person.  Either it's a dramatic story that exploits our sensitive stories or it's a rainbow and glitter view of adoption that ignores the realities adoption entails....but there's hardly ever a balance there either.  But then again, I don't look to the media for wisdom either.
on August 14, 2010
Email ThisBlogThis!Share to TwitterShare to FacebookShare to Pinterest
Labels: Adoption, Adoption Loss, family systems, media