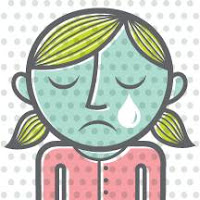 I remember when my son was born.  After 2.5 hours of pushing I was nearly exhausted.  It didn't help that my doctor was absolutely gorgeous and my nurse was a stunning vision of Jennifer Love Hewitt without one hair or a bit of makeup out of place, while I lay there feeling tired and sweaty in my thin hospital gown.  When he was delivered and placed on my chest, I remember my mind doing some sort of mom gymnastics.  I was loving him, amazed by him, and glancing over every part of him to make sure he was OK while bursting into a sudden realization of what motherhood is.  I couldn't help but notice that when he opened his mouth to cry, something seemed odd with his tongue.  I felt concerned yet simultaneously ashamed of myself for noticing that something seemed not-quite-right with this perfect child.  I just wanted to know he would be OK.

I asked about it but the nurses didn't seem concerned.  They were busy making other arrangements to transfer me to the post-delivery part of the maternity floor.  Later on I was told that he had a "tongue-tie" where his frenulum is so short, he is barely able to lift his tongue.  I was informed that this can interfere with his eating and breastfeeding as well as him being able to develop speech later on.  He did have trouble breastfeeding in the hospital and I remember feeling stressed and overwhelmed as each nurse shift would change and another nurse would come in and tell me "a better way" to feed my son.

Along with the informative explanation about tongue-tie, we were told it was genetic and at some point in the conversation I recall being asked if it ran in either of our families.  My husband was unaware of it being an issue in his family.  Then there was me, the (at the time un-reunited) adoptee with no family medical history.

Back years ago, they would fix tongue-tie right in the hospital, now they want children to go to a specialist.  I realized that if I had been born with it and it had been fixed in the hospital or any time within the first 4.5 months of my life, I would have no way of knowing about it because I had no information about my life or medical care from that time period.  I had no idea if there was anyone else in my family who had it.  I immediately conceded "it must have been from my side," feeling sheepish that I went through 9 months of pregnancy with no genetic information to pass down to the child I had just brought into the world.

Maybe I felt like I was indirectly being blamed because they asked the question about family history and I thought it must have been my side he got it from.  Maybe I was blaming myself because when I love someone and want to do everything in your power to make life perfect for them, and when something goes wrong, I can feel like it's my fault even when it isn't.

A professor of mine once talked about how it is important to explain things to others and work on finding the root and a solution, but at the same time not phrase it in a way that makes a person feel like they are being blamed for the issue or problem.

Sometimes I think talking about adoption can be that way.  No matter what some one's connection is in adoption, when we talk about the problems that they feel involve ones they love, they may feel like they're being blamed.  I think it's important to be able to speak about adoption, acknowledge the truth and the problems it entails, and not be hindered by taking things personally.

No, I am not speaking about excusing unethical behavior or suggesting we not correct stereotypes and generalizations either. It has, at times, been hard for me to explain my adopted experience to others because there's adoption-related emotional "stuff" another person may carry that stands in the way of them truly understanding my perspective.  That is what I am reflecting on today in this post.

In case you're wondering now that I'm reunited, I know that tongue-tie doesn't run in my family either!  Go figure!

"The trouble with having an open mind, of course, is that people will insist on coming along and trying to put things in it." --Terry Pratchett

﻿This post is part of my series for November's National Adoption Awareness Month--promoting the truth about adoption.