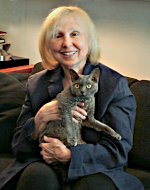 As some of you may already know, BJ Lifton (Betty Jean Lifton) passed away on November 19, 2010.

Lifton was an Adult Adoptee, an Adoptee Rights Advocate, a Psychologist, a therapist, a lecturer, and an esteemed author.  She wrote many books and professional journal articles.  Lifton spoke out about the complexities of being adopted during a time where adoptees rarely did such a thing.  Because of her and many others, we have increased awareness of the many issues surrounding adoption and an improving societal atmosphere to discuss them in.

When adoptees and Adoptee Rights Reformers were criticized, Lifton took a stand for us.

Her books include:
...among other books and articles.

Lifton also had a website and a blog that I encourage you to check out.

I was only ever able to speak with her a few times when she emailed me after finding my blog.  I had no idea who she was at the time and regret missing the opportunity to ask her questions about her work.

Lifton has been writing, supporting, and advocating for the rights and needs of those within the adoption community for much longer than I've even been alive.  I didn't know her very well and am still diving into her various works; I hope you will check out the blog postings by others who also had a tribute to make to this wonderful woman.