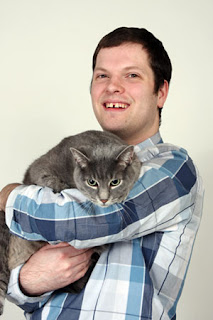 Nathaniel is a foster alumni, the son of an adult adoptee, and a freelance journalist in Vancouver, British Colombia.  More of Nathaniel's work can be found at his website.  Nathaniel agreed to have his piece, Queer in Care, published on my blog for National Adoption Awareness Month.  This piece was originally published at Xtra! on December 8, 2005.

I hear a voice calling me from upstairs. "Nathaniel, we'd like to talk to you."

I have been dreading this moment.

I make my way through the cluttered front hallway and creep up the stairs. I enter the kitchen utterly terrified of what seems like impending doom. My heart begins to pound and my knees shake uncontrollably.

An eerie calm fills the normally busy, loud foster home where I live. My foster parents are standing pensively in the kitchen. Although it is well into the evening they have not changed from their stuffy work uniforms to their usually comfortable "at home" garb of jogging pants and T-shirts; they have been waiting hours for me. There are no signs of dinner; the only dish in sight is my foster mother's quickly overflowing ashtray.

I am pulverized by my foster father's intense gaze as he pulls a piece of paper out of his pocket.

In one thunderous gesture he slams it down on the counter and bellows: "What is the meaning of this?"

Before I can answer, my foster mother interjects in a tone of frantic despair, "Nathaniel, it's like you've taken a knife and stabbed it in our backs... Why? Why did you do this to us?" To which her husband adds, "I've worked 30 years at my job. Thirty years down the drain now. You've ruined my career-thanks a lot."

They are husband and wife, mother and father, employees of the provincial government, prominent members of the community, and I am their foster child. With one damning letter I have destroyed all that, or so they claim.

I had to do it-I could no longer put up with their flagrant homophobia, so I documented every instance and submitted it to my social worker as a formal complaint.

I was placed in that household during a period of personal growth when I was beginning to fully realize the power of being a queer youth. My mental, emotional, and spiritual stability depended on the acknowledgment and nourishment of my queer self. I needed to explore and understand this identity which was integral to my growth.

Living in a homophobic foster home gave this identity search a sense of urgency and zeal which pushed me ahead at lightning speed.

In my first week in their household I realized that their views on homosexuality were not conducive to my own development. Every member of my foster family openly expressed their homophobic views.

I never came out to them as such-that was done for me.

One of their more inquisitive sons made an assumption about my sexual orientation based on my choice of music and awkward aversion to their conversations involving explicit descriptions of heterosexual sex acts. When the middle son asked me if I was gay and I answered in the affirmative, the news spread like wildfire.

Within days, neighbours were calling me "faggot" and my foster mother solemnly informed me that her husband was disappointed with my "choice."

While knowingly in my presence, my foster parents' sons used the term fag and faggot in reference to queer people and sometimes as a direct reference to me. On the issue of gay rights, the eldest son's views could only be described as vile, once declaring that "the only right that fags deserve is a bullet in the head."

My foster father believed my sexuality was a choice and went so far as to compare it with the choice of cars.

Although not a particularly religious man, he always peppered any discussion of homosexuality with Biblical quotes. In a judicious tone he would condemn homosexuality as a crime against the Bible and therefore a "sin against God."

When outlining house rules, he informed me I was welcome to live under his roof on the condition that I did not bring any of my gay friends over, yet his sons were encouraged to bring their girlfriends over. I was not to use his computer to write gay literature or correspond with prospective gay lovers.

By then, I had read several pamphlets and books on queer issues and was acutely aware of what was acceptable and unacceptable behaviour.

I consistently challenged them on their use of homophobic language and let them know that I was not okay with what they were saying. Sadly, my bold attempt at educating them backfired; they felt that it was some kind of unwarranted attack on their freedom of speech.

When her four-year-old granddaughter uttered the word gay at the dinner table, my foster mother said: "We're not allowed to use that word anymore" in a hostile, mocking tone.

I needed to be in a queer-friendly space. I found one at a local queer drop-in centre.

It was a queer-positive space where once a week queer youth would hang out. We drank way too much pop, stuffed our faces with greasy pizza pops, exchanged tarot readings, listened to music and watched movies.

This downtime in a queer-positive space blossomed into a sense of community, belonging and identity.

There was a certain thrill to the drop-in, as it felt very much like a secret club. We met once a week in borrowed space. We had a queer library, poster collection, condom collection, and junk food stash that all went back into the closet at the end of the night.

The volunteers at the drop-in were mostly professional men and women. Among other things, they were professors, social workers, doctors, and nurses. There were two volunteers that had a particularly significant impact on my life; they didn't go back into the closet at the end of the night.

They were both professors at the local college. I was in awe of both of them as they were unlike anyone I had ever met before: they had lived in many countries, they spoke different languages, they had published books, and held post-graduate degrees. They both took an avid interest in what I had to say.

During my life I have dealt with dozens of professionals (doctors, social workers, lawyers, etc) but these two women were the first professionals to treat me as an equal. I was not their client, charge or pet project but a friend.

They were my brightest stars in the darkest nights.

My foster family viewed my participation in this "secret club" with suspicion and thinly veiled contempt.

Going to this drop-in strengthened a part of me that they could never understand or change. They expected me to be quiet and put up with their abuse. I refused.

I sent a letter to my social worker about my foster family's continuing mistreatment and callous attitudes. My social worker, who was acutely aware of queer issues and supportive in my endeavours to participate in the queer drop-in, promptly accepted it.

However, I later retracted the letter under immense pressure and intimidation from my foster parents. They told me that if I wanted to move that was fine, but it was unnecessary to make a "big deal" about it.

Unlike most of their possessions, which were haphazardly strewn about the floors and shelves, they wanted their hatred swept neatly under the rug. At the age of 17, I left this home, but before I did I left several queer liberation posters on my wall, which explained why I was a part of this movement.

As I left, I felt as if I were walking off into the light, ascending to better things and places-free to be queer or whatever else I wanted.

The sense of community and support I received from the drop-in centre gave me the confidence and strength to stand up against discrimination and oppression. I asserted myself against my foster family to ensure the ministry was aware of the plight of queer youth in care, sending a clear message to all concerned that the time for silence was over.