Adult Adoptees go to Congress: the Recap You've Been Waiting for 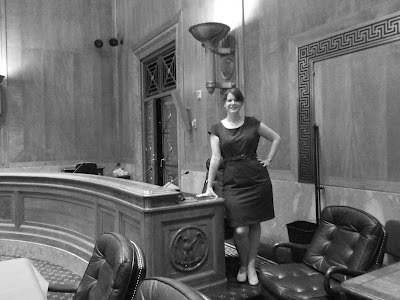 Those of you with whom I tread this weary path know what I mean when I say that Adoption Reform is tiring and often frustrating work. In the short time that I have been engaged in the dialogue of change and ethics in adoption, I have seen the tired, the burn-out, and the frustration. I have felt these emotions myself. Essentially, we often have to battle so many misunderstandings people have about adoption, and the bias they may have against us adoptees who are in the "child" role of adoption, before we even get to present our causes. Every once and a while, things happen that let you know its all worth it. Sometimes it's correspondence from a legislator who understood your message. Each year for the Adoptee Rights Coalition, it's when people stop their cars in the middle of the street seeing our demonstration, and say in tears, "I'm adopted and no one knows I want my birth certificate. Can I please have one of your papers?"  Yesterday's trip to Congress with some legendary adoptees, where we met with incredible people, was one of those experiences for me. So many of you asked for a recap. Here you go.


Thunderstorms rocked my town, and my home, the night before this meeting. After finally getting my kids who were frightened by the noisy torrent outside to bed, I was able to finish preparing for the day ahead. Fueled by fewer than three hours of sleep, I awoke, dressed, and boarded the train to Washington D.C. 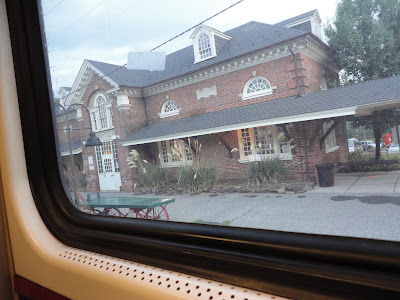 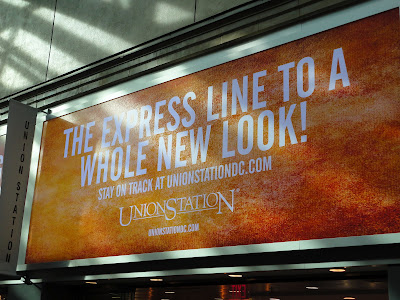 I made my way over to The Dirksen Senate Office Building where I first met A.J. Bryant. Soon after, A.J. and I were joined by Susan Branco Alvarado, JaeRan Kim, Kevin Ost-Vollmers, Dr. Stephanie Kripa Cooper-Lewter, Dr. Farnad J. Darnell, Joy Lieberthal Rho, and Kelsey Hye Sun March. We were later after on the phone via conference call by Peter Dodds, Astrid Dabbeni, and Michelle K. Johnson. 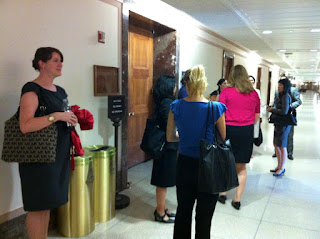 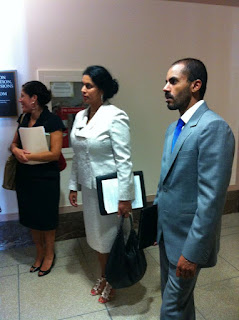 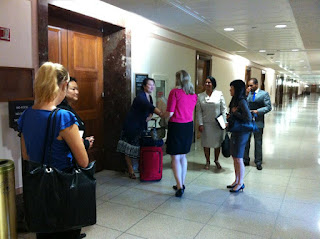 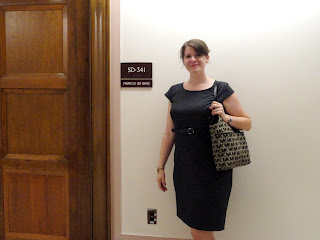 I absolutely will not lie by saying this was not an intimidating group to be with. Not because they aren't the nicest people ever (they so are!). It's because each of these adoptees is incredibly knowledgeable, well-spoken, educated, and extremely skilled at their professions. I am so blessed to have had the opportunity to interact with them and make new friends. I also wanted to meet JaeRan and Joy as I consider them role models when it comes to blogging and the Social Work profession. A little known fact: years ago, I almost walked away from blogging out of frustration, and decided not to after discovering JaeRan's Harlow's Monkey--a blog that convinced me that being adopted and being understood was possible.

I did not do a headcount (though I am betting Kevin has one) but I can safely say the entire room was packed. The seats around the large boardroom were filled as were benches and chairs around the room, once there were no longer open seats at the table. We were joined by Congressional staff, the head of the CCAI, and McLane Layton of Equality For Adopted Children. I won't say which of the Congressional staff were there as I don't want to offend anyone by posting their names without being sure they would be OK with it first.

The first topic was delivered brilliantly by JaeRan and Susan. They talked about adoption dissolution and disruption. JaeRan discussed the difference between dissolution and disruption. "Disruption," at least 10% of adoptions, refers to when an adoption fails before finalization. "Dissolution" refers to when adoptions fail after finalization. Dissolutions are not recorded so we do not know how many of these occur--especially because many are done as private transactions between families. Susan discussed "dissolution by death" where adoptees are either murdered or die from severe neglect in their adoptive homes, and she highlighted the additional problem of these dissolutions not being recorded. Using experience from her practice, Susan discussed instances where adoptive families are not receiving adequate or competent support from their agencies that could help prevent adoptions from disrupting.

Equally brilliant were Stephanie and Joy with their discussion of oversight of adoption. They made suggestions regarding Universal Accreditation and the auditing of adoption agencies to minimize the loopholes agencies have that allows them to avoid providing certain services or be accountable when things go wrong. Joy and Stephanie discussed a vision of all agencies being required to meet certain standards and be competent in all services necessary to facilitate an adoption, such as all agencies doing their own home studies rather than working through another agency where neither ends up accountable for any problems.  They also discussed the need for concrete consequences when agencies fail to practice in a way that is ethical. Later, JaeRan added that unethical adoption agency practice is most often called into question when financial mismanagement is involved. She concluded that unethical practices not exclusive to financial mismanagement, such as failure to provide competent post-adoption services, needs to be included in the oversight of adoption agencies.

Kevin delivered a fantastic presentation on adoptee citizenship. McLane Layton discussed the Child Citizenship Act of 2000, which provided automatic citizenship for adopted children under the age of 18. She also discussed its unintended consequences where citizenship differs for adoptees based on the type of visa they are given. Also, because adult adoptees were not given automatic citizenship, various problems have presented that make adoptees eligible for deportation (and some have been deported or are pending deportation).  Some inter-country adoptees are finding out they are not citizens when they attempt to vote, get a driver's license, or apply for a passport. Language in amending the existing legislation to fix many of these problems was discussed.

As you can probably already guess, I discussed Adoptee Rights--retroactively restoring the right of adult adoptees to access their own Original Birth Certificate. I couldn't have done this without Sandy White Hawk, Director of the First Nations Reparation Institute, and Michelle K. Johnson, MCAR member and Volunteer Coordinator for Minneapolis' GAL/CASA program. Together, we created the presentation that I delivered, forming a broad and accurate view of the impact of sealed records on several populations of adult adoptees. Typically, Adoptee Rights is opposed based on already disproved arguments surrounding a tiny portion of U.S. adoptions (private, domestic infant with mostly Caucasian adoptees). However, sealed records impacts everyone, including step-parent adoptees and foster adoptees who are already likely to know their original information, and as First Nations adoptees, who are robbed of tribal membership and benefits.

I will be forever thankful to Joy for sharing that sealed records also impacts international adoptees who are guaranteed their information by the Hague, but they are often still denied because of the laws of the U.S. State they may have been re-adopted in.  Without Joy, ICA adoptees would not have been included in my presentation because I simply did not know this issue impacts them as well.

Everyone in the room was thoughtful, receptive, and insightful. I was asked a lot of questions which I answered to the best of my ability. I think all of the Congressional staff there really wanted to understand the issue and use that information to try to help. What I could have done better was mention in-depth Maine's legislation, which has a "contact preference form" with their equal access bill--which is an acceptable "compromise." I neglected to do this because I typically do not discuss any sort of "compromises" unless I feel it's absolutely necessary--such as when a simple access bill does not have a good chance of passing. Looking back, everyone in the room seemed to understand the equality argument and discussing Maine's law would have inspired more confidence about the probability of getting Access Legislation passed in more States. I plan to follow up with the meeting participants with Maine's legislation and will discuss it in future meetings.

Farnad and Kelsey concluded with the discussion of sustaining on-going contact between adult adoptee professionals, the CCAI, and members of Congress and their staff. Both Kelsey and Farnad have great group-work skills. Additionally, Kelsey did some of the pre-group planning and contact. Farnad facilitated open discussion at the table which resulted in Congressional staff responding with extremely helpful advice on how to reach out to legislators and engage effectively in discussion (I may share some of those tips on a later date).

I can't thank everyone enough for how much they taught me during this experience and for including me. Thank you to Kevin Ost-Vollmers for putting this meeting together and for facilitating contact between an incredible amount of people in order to make this event possible. For everyone reading this, please make sure to let your legislators know about this meeting and that more will be taking place. Request that they or their staff take interest in joining with us in discussion. Thank you to the CCAI and Congressional staff for your thoughtful questions, helpful feedback, and listening ears. I look forward to more positive engagements like this in the future.