A Quote from What I'm Reading: "An-Ya and her Diary" 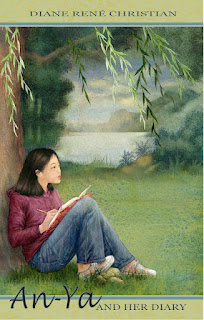 "An-Ya and her Diary" is a fiction novel that is composed of several short stories written as a diary.  The author, Diane Rene Christian, is an award-winning short story author and adoptive mother.  "An-Ya and her Diary" captures the thoughts of a 10-year-old Chinese-American adoptee about her life in an orphanage, her surrender by her Chinese mother, her adoption, and her adjustment to life in the U.S.  An-Ya was found as a baby inside a box with only a red journal and her name.  Her journal became her beloved companion.  An-Ya's blank, red diary was a symbol of the mother she could not remember.  While An-Ya writes each entry to her journal, "Penny," her first mother is the subconscious addressee of each note.  An-Ya writes to preserve her past that connects her with her mother and her present reality which her first mother can't share with her.

I want to take care not to erase relevant issues of race and culture from this book discussion.  The character of the book is an inter-country, transracial, Chinese-American adoptee.  The author who gives this fictional character a voice is not adopted and is not Chinese-American.  Although I am adopted, I do not know what it is like to experience transracial, intercountry, or older child adoption.  I am also not Chinese-American.  These elements of my identity impact my perception of the book and they cannot be ignored.  As an adoption activist, I have a respectful desire to explore media, policy, and issues that are outside of my own experience within adoption.  Of course, my feelings of how transracial, inter-country, Chinese-American adoptees are portrayed in media is no replacement for the opinions of an adoptee who identifies more closely to that experience.  I am hoping to still bring something of value to the discussion of this book.

Adoption is everywhere in the media, and fictional literature is no exception to this reality.  I think it is important to explore how both adoptees and adoption are portrayed in literature.  Fiction or non-fiction, I believe that many people walk away from books and magazine articles that cover adoption believing they have learned something of value that shapes their own, even subconscious, view of adoption.  So we in the adoption community have to ask ourselves, are the ideas of adoption put forth by any given book good?  Are they what we feel people need to see?  Is the adoptee, and their family members in the story, portrayed in a way that we can say is fair to the overall adoption community?


“It doesn’t feel like I have ever been a baby girl.  To anyone.  Ever.  It feels like as soon as I was put in that box by Them that I became a person just trying to live and figure out how to keep living to the next day.  Baby girl?  I was never a baby as far as I can remember.”  110

I had tears rolling down my cheeks about every other page of this book.  The book has a sincere sense of "realness" to it.  I identified with some of the diarist's own feelings on loss and being adopted.  I also mourned for the adoptees whose very real stories are symbolized within this fictional character's experiences.  Diane told me that she receives feedback that people wonder if the book is a real account of an adoptee's life.
The main reason I like this book is because I think it is what activists have been asking for when it comes to featuring adopted characters in fiction writing.  Adoption in literature is commonly used to dismiss inexplicable portions of a plot or explain why a character is incredibly evil, unstable, or superhuman.  As Diane told me, a book like "An-Ya and her Diary" was missing from the fiction arena.  "An-Ya and her Diary" portrays the adopted character, as well as the characters in her life, in a way that is positive and respectful.  A reader may find themselves cheering along with the book's character's triumphs and mistakes, wanting the characters to succeed.

An-Ya's story provides respectful insight into adoption.  By "respectful insight," I don't mean that it holds the institution on a pedestal at the expense of the characters living it.  What I mean is that adoption's gains and losses are portrayed while well-meaning characters do their best to navigate them.  Diane wrote to me, "As an adoptive parent, my greatest hope is that it is received as well-written and respectful of the adoption triad...especially adoptees. I hope my children feel respected by the narrative."

An-Ya takes us through her grief, her thoughts on her life in the U.S., and her thoughts of her life in China.  Toward the end of the book, An-Ya starts to blossom and find a new "normal."  As I turned the last page, I found one blank page, then another, and then another.  This reminded me that An-Ya's story, as any adoptee's, lasts for a lifetime.  This is a reminder that "An-Ya and her Diary" is not simply a book, it is an adoptee's journal, and a symbolic embrace of adoptee narratives.  When I look at the pages of An-Ya's  diary that still await the strokes of her pen, I am reminded of how sacred each and every adoptee's narrative is.

*In the interest of disclosure, I was given a copy of this book in exchange for an honest review.
on August 24, 2012
Email ThisBlogThis!Share to TwitterShare to FacebookShare to Pinterest
Labels: Adoption, An-Ya and Her Diary, China, Diane Rene Christian, Fiction, inter-country adoption, International Adoption, Quote From What I'm Reading Wednesday, Story Telling, transracial adoption