Reunion: the Merge of Two Realities 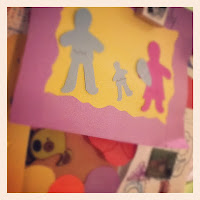 I chuckled when I pulled M's "family portrait" that he made at preschool from his tote bag.  All four of our immediate family members were present in the colorful picture.  I could not help but notice that his little brother, W, was a tiny baby swaddled and in my arms in this creation.  I could immediately imagine M sitting at his little table surrounded by peers, making his case to his teachers as to why W needed to be a baby in the picture.  W is eighteen months old, technically a toddler, and is only a head shorter than M.  M proudly calls him "Baby W" and corrects me when I tell W that he's getting to be so big.  M is not ready to share the status of "big boy" with W yet. How M views his family is his unique reality.  This made me think of another little boy I am related to and his family reality.

I grew up believing that I had been unwanted by my first family.  This is not an idea my adoptive parents planted in my head, but rather, it was a conclusion that I drew as a result of having few facts available to me regarding my adoption.  I knew my mother was young, my conception circumstances were among the worst imaginable, and the agency specifically said that she just wanted to "move on with her life."  I don't suppose there was any other conclusion I could have drawn.  While I was very much loved and wanted by my adoptive family, the idea that a family out there did not want me still stung.  It was indescribable.  I was determined to be OK--despite the stinging--that it was ever possible for me, or for anyone, to be unwanted.  I accepted that this was a part of my narrative, I acknowledged that it bothered me, but I was determined not to let it effect my self-esteem.

And then things changed, as life changes.  When I entered young adulthood, multiple people curious about my adoption suggested to me that perhaps I had been wanted or was loved by my first family.  Then I started discovering blogs of mothers who explained the original parent side of private adoption from a variety of perspectives and experiences. Lo and behold, not one mother I encountered had any disdain for her child.  As I grew in the feminist perspective, I was able to acknowledge that as children often go from poorer families to wealthier ones, this reflected the broader social issues of privilege.  I stopped personalizing my surrender so much because I could finally see the systems at play that impact us all and that sometimes poverty and other circumstances separate mothers from the children they very much love.  Becoming a mother was what ultimately made me want to understand my mother's perspective more.

When I embarked on unsealing my original birth certificate and State adoption files, I decided that it was very important for me to first know if I had been named.  If she named me, that means she cared, I thought to myself at the time.  I was delighted to discover that I had been named.  I was "Christen" at birth and legally for the first 8 months of my life.

I carefully wrote my first letter to my first mother as if I could somehow be sure to say everything I needed to say perfectly.  At the close of my first letter to her, I realized the Confidential Intermediary had never told her my name.  Then I realized that, to her, I was not "Amanda."  I was "Christen."  I decided to sign my letter with "Love, Amanda/Christen" so that she'd really, truly know that the letter was from me.

When we first met, she acknowledged how I had signed my letter and thanked me for it.  She also said she preferred to refer to me by how I identify; by my current legal name.  My oldest-younger brother, who was seventeen at the time, mentioned to me at least once, "You were Christen to us.  That's what we've always called you."  I suppose the task for my first family in that instant became the need to embrace me as Amanda while accepting that I am Christen.  Their Christen was no longer an abstract concept floating around somewhere "out there."  They did not have to wonder about her anymore.  She is real.

"Christen" was so much more than a name to them.  It was a reality.  It was how they included me into the family when I was not physically present.  It concretized my existence in some small way so that they could still hold a piece of me.  "Christen" represented the lost family member they could know nothing about but that they knew was out there.  Calling me "Christen" was how they held onto me and claimed me as their own when they had no other way to do so.

When my youngest brother, six at the time, saw me standing in their living room for the first time, his gaze drifted from me and over to a wooden frame on the wall.  The frame held carved, wooden representations of people arranged within it.  There was a figure for my mom, one for her husband, one for each of my brothers, and one for me, labeled "Christen."  My brother used a chair to retrieve the wooden family representation from the wall.  Taking a Sharpie marker, he scratched out "Christen" and wrote "Amanda."  We all stood there in silence, no one knowing what to do or say.

"There, now it's right," he said softly.  As though their reality had always been wrong.

And my heart broke into a thousand pieces for him.
on September 21, 2012
Email ThisBlogThis!Share to TwitterShare to FacebookShare to Pinterest
Labels: names, narrative, Personal Account, Reunion