How the Idea of Gratefulness Hinders Reform, Progress, and Truly Helping People 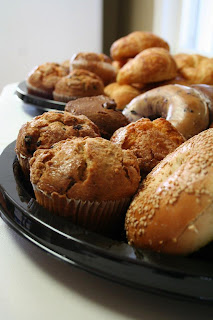 "Thank you!" I called from the door as the donor drove away.  Someone had just delivered three huge boxes full of boxed and canned goods to my agency's food pantry.  I tugged each box to our pantry and smiled at my supervisor as she entered the room, just as I finished loading the last box onto the food room table.  We opened the first box.  Almost everything inside was expired, some food was opened, and some cans were covered in rust.  By the time we made our way through the second box, we were unwilling to so much as open the third. Everything had to go into the trash.  "What people don't realize is that, if you don't feel safe eating it, it's a good indication someone else won't either," my supervisor has said.  So why do well-meaning people donate expired or otherwise unsafe food to a charity agency to be given to others to consume?

It happens more often than you think, and I do feel terrible throwing the food away.  My rule of thumb is, if I wouldn't eat it, I don't expect my clients to take it home to feed it to their families. When people clean out their pantries at home, I think they tell themselves that if someone is going without food that person would be grateful for whatever food that they can get.  Even if the food is expired, or the can is rusty, or the box of pasta is covered in a thick dust from years of sitting in the back of a pantry--- they know that someone will be grateful to have it.

The assertion of the idea--that someone who can't afford food would be willing to take whatever they could--is correct.  There are people in the world with so few resources that they regularly eat things that others would not consider safe.  However, this idea is not just.  Subsequently, it is my job as a professional to advocate for my clients, to set a standard of what can and can't be donated to my clients, in order to keep them safe and healthy.

Why?  Because they are human beings.  Equally human to everyone else who is human.  And although they might be willing to accept food from a pantry that those who aren't struggling financially would not accept from the grocery store, it is my job as an advocate and a professional to set a standard for how I think the human beings I serve should be treated.

Gratefulness for blessings in life can be an admirable personal goal.  However, the emotion of gratitude is not an acceptable standard for human kindness or human rights.  We cannot do right by people only up to a level where we think we can expect them to feel grateful.  We do right by people in a way that honors their dignity and worth as a person.

Isn't this the same concept we go back and forth with in adoption?  One of the biggest objections to Adoption Reform is the idea that adoption as it exists is perpetually "good enough" and anyone who challenges the existing system is "ungrateful" either for the home they received through adoption or for the homes other children have received.  Because my life as an adoptee could have been worse, I cannot challenge the problems existing in adoption.  Because my life could have been worse, as some suggest, I have no right to evaluate what parts of adoption I like or do not like.  The idea that an adoptee should be grateful that things are not worse becomes the excuse for others not to acknowledge that things need to be better.

So as an activist, a human rights advocate, and a professional serving human beings, it now becomes my job to remind others that adoptees, and our families, are human.  We cannot do right by children and adoptees only up to a level where we think we can expect them to feel grateful.  We do right by children and adoptees in a way that honors their dignity and worth as people.   Gratitude is not the standard for ethics, professionalism, and child welfare in adoption.  Human rights is.  Until everyone who works in adoption, every person who serves as an adoption change-maker, from the meta-micro level all the way to the meta-macro level understands this, we will never have an adoption system that is entirely healthy.

---------------------------------------------
Some food pantries will accept and distribute expired foods.  Each label on a food product "best if used by," "expiration date," and "sell by" means something different depending on the product.  If you donate, work with your local pantry according to their rules and standards.  Before donating to a pantry, it is best to call ahead and discuss what items they are accepting (donating things they can't use and must pay to dispose of is ultimately not your goal, after all).