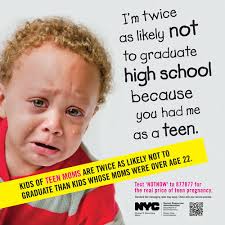 If you're visiting a New York City subway anytime soon, you might take notice of new posters featuring small, tearful children.  "Dad, you'll be paying to support me for the next 20 years" one poster reads.  New York City has embarked on a campaign aimed at reducing teen pregnancy rates.  The city hopes that by informing teens of the statistics citing poor outcomes for teen parents and their children, fewer teens will get pregnant.

Proponents of the campaign maintain that shame is an effective tool to keep teenagers from becoming pregnant.  Opponents point out that the campaign perpetuates gender stereotypes and misleads the public into believing that teen pregnancy is the cause of poverty.


We could focus on whether or not shame might keep a given teenager from engaging in unprotected sex and becoming pregnant.  However, we should instead pull the lens back and understand that the risks of using shame far outweigh the likelihood that teen pregnancy rates in New York City will fall.

The posters focus on the challenges of teen pregnancy as though they are caused exclusively by a personal deficit inherent to teenagers.  They send discouraging messages to young parents using the subway and bus systems while trying to make ends meet. The posters encourage scorn for these young people while ignoring the systemic barriers that cause parenting to be harder on teens and hard for many parents of all ages, really. The posters also portray negative perceptions regarding children by focusing on the idea of children as a burden within the context of a largely child-intolerant society.

A recent op-ed in the New York Times features the voice within the population of teen parents.  Gloria Malone, pregnant at 15, describes not only how the posters make her feel but the struggles that she had to overcome.  She felt shame, and she overcame obstacles.  She graduated with honors from high school and went to college.

The blame, shame and stereotypes expressed by so many others simply told me to give up. Stereotypes and blame do not stop teenagers from engaging in unprotected sex or discourage teenage pregnancy. They simply keep teenage parents from seeking the help and support they need. The only tools that have been proven to prevent teenage pregnancy are comprehensive sex education, birth control and abstinence.

In her op-ed, Ms. Malone defines the problem that teen parents face, as she had faced.  She offers a point of view both from educating herself on the issue, and living the issue herself.  It is she whom these poster creators should be looking to for guidance.

Her story was one of a triumph.  Perhaps we could argue that it is a unique story that defied the odds. Yet her story also exemplified the typical barriers set in the way of young parents each and every day. What makes her story unique is her incredible resiliency in overcoming the external barriers faced by parents everywhere.  Throughout her narrative, we see that this resiliency was nurtured by many of those around her.

Resiliency is a strength so many in challenging situations have that can be nurtured to help them overcome internal and external obstacles to achievement. We increase the likelihood of a young parent's success if we help them identify their strengths.

The problem with these posters is that they do not identify strengths. They don't focus on the dignity and positive qualities of young parents and their children. They do nothing but reduce these young people to a statistic, and shame them for the situation they are already in. The posters both advertise and normalize hurtful attitudes.

The problem-focused approach says "why should I help you?  You never should have gotten pregnant in the first place."  We've been there and we've done this.  Nothing has changed. Alternatively, a strengths-focused approach says "I see you are having a tough time. Let's think of some resources and reflect on a time when you've done well. Let's hone those skills and help you succeed." Only when we take the time to see the strength and worth of people and encourage them to achieve their highest potential will everything change.