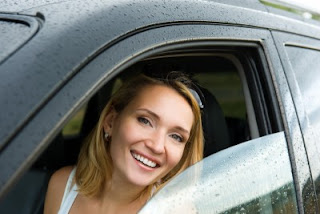 I was ten years old when we moved into our bright blue house.  After living in an apartment for the first ten years of my life, this was an exciting move.  For the first time I could hang things on my wall and paint it whatever color I wanted.  I chose pink carpets and painted my walls a deep midnight blue.  I covered the ceiling with stars that glowed at night and filled one wall with stencils of fish.  On the far wall across from my bed I painted a mural of flowers.  A pink and blue flowered comforter was spread out across my bed topped with a themed pillow from the best movie ever (The Lion King, of course).  This was perfect.

Two homes on either side of ours were also being built.  A white SUV pulled up to the home on the right of our house.  A short, thin, young blonde woman got out.  Something immediately fascinated me about her.

She is my first mother's age; right now.  Right in this moment of time.

Kelly was friendly and happy all the time.  She liked to take me out for ice cream and chattered away beside me in her white SUV with smooth tan leather seats.  She liked to lease, not own; but she always got the same white SUV every time her lease was up.  She did not have any children but was sure I would babysit for her once she did.  Kelly had a love-hate-relationship with Italian food when she was dieting.  She wanted me to go on walks with her along the beach to get exercise.  She had two earring studs in each ear and liked to die her hair.  I would sit and listen to her for long stretches of time just soaking in her life and everything that was important to her.

Throughout our talks I wondered if my first mother liked the same things that Kelly liked.  Was her life a cycle of dieting, exercise, work, white SUVs, cooking, and long walks on the beach?  Were her ears pierced twice and did long, golden hoop earrings swing from her earlobes?  And, oddly enough, I did wonder, would she think I am cool?

Kelly thought I was cool during a time when I was being teased at school and did not feel well-liked by my peers.  I would sit on her floral sofa in her living room with her soaps humming in the background while she talked about her fascinating day.  She'd try to feed me dinner even though I had already eaten at home.  Her husband would walk through the door, spot me on the sofa, mumble "hey Manda" and go tinker in his garage.

Kelly did more than boost my self-esteem.  She unknowingly helped me with re-processing my adoption narrative at a new stage of development.  I recently talked to a journalist student about how adoption may be thought about in different ways depending on an adoptee's cognitive abilities at a given age.

When I was little, adoption was magical thing that made me special.  Let's describe it by the phrase "oh good!  I'm here with you!"

When I was about seven to about twelve, an age group marked by more concrete, logical thinking, the toughness of it set in.  Let's describe it by the phrase, "OK...I am here with you.  Why am I not there with them?"

My teenage years brought on a whole new set of thinking skills to process the same narrative.  Let's describe it by the phrase "I am here with you, but not there with them.  What does this mean?"

Recently, a wise person in my life said that we must be open with children about the challenges their parents face (in age-appropriate ways).  Children will fill in the blanks of a story when they don't have information, I learned.  But they will not always do it in a self-affirming way.  I talked about this before in my own narrative and how the information that my adoptive family was given was not adequate enough for me to not fill in my story with negative things.  Kelly was one of the bright gems in the midst of this process for me in adolescence.

Kelly unknowingly helped me visualize my own first mother in a tangible and realistic way.  When I met Kelly, my first mother was no longer a 14 year old mirage in a land far away, forever frozen in time.  She became a real person with real feelings, good qualities, and understandable challenges.  And she was someone who might even think I was cool.  Kelly was so meaningful to me that when I try remember the conceptualization I had of my first mother as a young person, the first image in my mind is of a 26 year old woman, not a teenager.  Kelly was 26 when I first realized the significance of her age in my life.

When I turned 26 two years ago, I found myself thinking of Kelly.  What is her life like now?  What is she up to?  Does she still have her white SUV?  I have reflected on Kelly each year of my life since I turned 26.  I think of all of the people who sat in our presence and bore witness to our processing of being adopted without realizing it.  Processing Kelly's meaning in my life now as an adult, I ask myself: who might be looking to me and other adult adoptees to find meaning in their own stories?  Do I sent a positive message about what it means to be a 28 year old woman who manages a multiplicity of roles, including being adopted?  To the broader adoption community, especially those with the most power: how can you help connect the voices of adult adoptees to adopted youth so that they can be empowered?
on July 29, 2013
Email ThisBlogThis!Share to TwitterShare to FacebookShare to Pinterest
Labels: narrative, Personal Account, roles, Story Telling