On Turning Five: Learning, Living, and Loving Through Memories 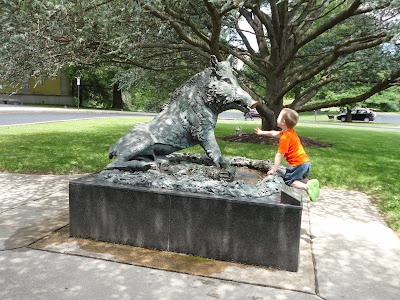 I awoke this morning to the muffled sounds made by my two early-risers down in our kitchen.  My husband quietly sang "Happy Birthday" to our oldest son.  Today is my son's fifth birthday.  A string of memories played out in my mind.


***
I remember my own fifth birthday like I remember no other birthday.  I awoke the morning of my fifth birthday in our green apartment where we lived until I was ten years old.  I threw off my bed spread and slid down the side of the mattress and box spring until my feet hit the cool, wheat colored hardwood floor.  I excitedly bypassed the enormous refrigerator box at the end of my bed that housed what could only be described as a "ball pit" of stuffed animals.  Normally, I would wake each morning and spring from my bed into my heap of stuffed animals.  That day I did not; I was simply too excited to delay.

I stood in my doorway, my toes touching the hallway green carpet just ever so slightly.  My short brown hair fell around my ears in a tousled bob with thick bangs that laid heavily on my forehead.  A white nightgown that came to my calves hung from my thin frame.  It had three buttons down the front of it and was speckled with a pattern of pink flowers.  The buttons didn't serve any purpose; they were just there for decoration.  I always thought that was silly.  I turned down the hallway where my grandmother, my adoptive mother's mother, was waiting just to give me a special message.

I might as well have been crowned as queen of the universe.  I felt so special in that moment from something someone said that was so simple.  I don't remember much else of that day, and I don't need to in order to know that this moment made it one of my best birthdays ever.  Beneath how special and how accomplished I felt, I unconsciously concluded that I am good.  I am good.

I would not always believe that I was good growing up.  Such is being young in a world full of negative messages.  This is why memories like this, and a sense of cohesion to my story, are so important.


***
I remembered the day I became a mother to my now five-year-old boy.  Usually when I think back on this moment, I think of how it was the first time I had ever seen a genetic relative or known what the mother-child connection is like from a mother's perspective.  Today I remembered how he had been whisked off to the NICU without me.  The medical staff, dressed in their green scrubs, claimed my son was making "a strange noise" when he cried.  I did not hear any such noise.  No, no.  I could have no say, and off he went.

I sat in a rocking chair as a nurse placed my baby in my arms.  My husband stood over us with the camcorder rolling.  I see this memory in my mind through the viewfinder of the camcorder, my hair balled up into a messy bun, my white robe tied but disheveled.  "He just wanted his mommy," I whispered as I rocked him.  Large tears rolled down my cheeks.  It was hard to be away from my baby.  I thought about how hard it was for my own mother to be away from her baby.  I thought about how hard it is to feel entitled to make parenting decisions when you are young and a new parent.  I hugged him closer.

I did not leave that NICU until my son did.


***
Today is my son's fifth birthday, I smiled as I heard the back door click open and the quiet thuds of my children's feet as they scampered toward the door.  My parents entered the our home, followed by my grandmother, my adoptive mother's mother.  She stood in the doorway, waiting, just to give him a special message.

My son smiled widely, filled with a sense of accomplishment.  I thought to myself, I hope he knows that he is good.

***
Today, as new experiences awaken the images of old ones from their resting places, I feel the love in my memories.