Shopping With a Soul: Why I Severed My Ties with LuLaRoe (Part I) 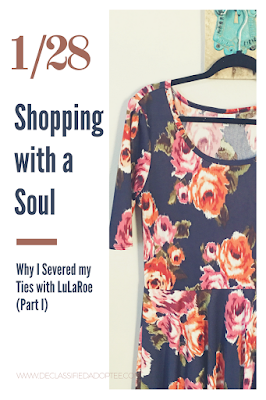 If you don’t own any LuLaRoe, I'm sure you have seen a party or had someone prop up their leg and demand you feel their buttery-soft leggings. LuLaRoe, a multi-level marketing company nearing its fourth birthday and reaching over one billion dollars in value, benefits from a dedicated cult following eager to share the brand. I found LuLaRoe two years ago, and fell in-love with the fit and the company’s then-dedication to ethical manufacturing. But lately, it’s not all fun and unicorns.

LuLaRoe was founded by Deanne Stidham who began the company by selling home-sewn Maxi skirts to friends of her daughter, Nicole. The brand grew under the oversight of Deanne’s husband, Mark. They employed most of Deanne’s children (who happen to be adopted), and extended family. LuLaRoe is now an overwhelming white and wealthy company whose privileges and narrow lens seem to be the culprit behind an increasingly concerning company culture. This culture has caused many of we former retailers once attracted to its advertised progressiveness to sever our ties, forever.

I started out writing this entry because a fellow adoption activist mused on my Facebook page wondering why so many of her friends have left LuLaRoe, and I wanted to explain the problems from my lens as a social scientist, clinician, and adoptee. I ended up writing more than I could've anticipated. This post will be split in two parts. Today, I will focus on the psychological abuse.

My concerns began when the defects issue arose, and LuLaRoe responded by telling customers and retailers alike that improperly sized leggings did not exist. However, moving their manufacturing outside of the USA to countries whose factories did not yet master the brand's odd sizing and patterns was exactly the culprit. LuLaRoe would provide no tools for sellers to explain this and even told us not to help customers by disclosing country of manufacture. This trend continued. With every problem or widespread defect issue, LuLaRoe denied problems and shamed retailers for complaining.

Shame may be an understatement. Mark Stidham was often verbally abusive on conference calls. This included, last February, telling retailers as a whole we were “pigs” and responsible for that month's dip in sales. Yet, it was the shortest month of the year and the month that LuLaRoe sends its top retailers on a 10-day cruise--leaving less than two selling weeks for the same monthly goals.

I never cared about lofty sales goals. My desire was to serve and train my once 150+ person team to reach their own goals. My team is one reason why it became so hard to leave once these problems stated. I didn’t want to leave them, and was told by DeAnne that I had an ethical obligation to them.

This "obligation" made representing this brand contentious for me when LuLaRoe’s assurance that their textiles were ethically manufactured transformed into straight-up voluntourism. Pictures and stories of the children in orphanages receiving donations from retailers, and videos of factory workers “happily” working, were paraded at company events. These same images and stories were disseminated in private retailer groups, telling retailers they were insulting the workers when they asked LuLaRoe to be accountable for defects. One leader posted a picture of an "orphan" she held, and accused retailers of being "ungrateful," using the boy's story.

I complained about this, which went nowhere. I anticipated that it would not. The strongest skill transferred to company leaders to handle complaints was to encourage downlines not to be "victims." This is reinforced by a “Don’t Be a Victim” training found in the Fashion Fundamentals training website and delivered at a Leadership Conference.

Otherwise, we were taught to realize when someone might be a “blue” communicator or a “green” one (or orange or yellow), and respond to them as if their personality type was an obstacle. In this training, we were asked to choose from appealing images and to group ourselves accordingly. My group, green, consisted of myself, one other woman who happens to be Asian and a friend of mine, and all of the men in the training. We were pointed out as “the most intelligent people in the room” which was paired with other off-hand stereotyped remarks about women.

All this weighing heavy on my soul, I felt trapped by the financial investment I had made, as well as other issues going on. I began my journey with this company through a business partnership with another retailer who began going through a lengthy, contentious, and expensive divorce and domestic violence case, shortly after I bought-in to the brand. I felt I had to choose between rejecting LuLaRoe and its increasingly depreciating values—and—keeping my business viable so as to not affect my partner’s custody case with her intensely abusive former spouse.

In addition to the verbal abuse and being warned away from "victimhood," the psychological abuse increasingly thickened. The company's trainings and advice to retailers completely warped the Law of Attraction. A true application of the LoA would be to say "I am wealth" and to create focus on what is and therefore what is possible. Because what we place focus on is what grows. Rather, LuLaRoe teaches to "envision" being wealthy (by placing focus on what is not) and to take steps to create wealth. And, if you are not wealthy and therefore are not making LuLaRoe wealthy, it's your fault.

Psychologically, LuLaRoe's business model is based on the "unreliable reinforcement" aspect of Operant Conditioning. A retailer is able to choose sizes and styles, but what prints or colors are delivered is up to the distribution centers. For every 30 items in a minimum order, there may be 5-10 "desirable" or "easier to sell" prints which will quickly turn a profit. Other items will cost you money by taking longer to sell (despite LuLaRoe receiving its full share of the profit, regardless). There are legitimate concerns about LuLaRoe producing so many items in the color orange, or orange-red, or yellow-brown when these are among the average shopper's least-favorite colors.

By being inconsistently "rewarded" with reasonably profitable prints and colors, this over-stimulates the areas of the brain that oversee reward and pattern recognition. The brain is designed to find patterns (e.g. I do X behavior, I will always get X reward) to seek out reliability in rewards delivered. In layperson's terms, this is one way shopping addiction (and other forms of addiction) takes root. This is how gambling addiction works and what makes someone feel bound to a psychologically abusive or emotionally unavailable partner. For a significant number of retailers means, this means over-ordering beyond their profits.

For LuLaRoe, it simply means.....profits.