"What if I Don't Want to See the Child I Gave Up for Adoption?" & NY Times' Troublesome Answer 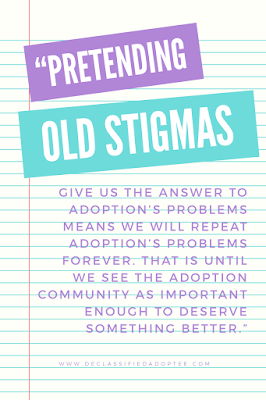 For some of us adoptees, adoption feels like a chapter of a story that the author abruptly stopped writing. No one knows what should come next for that chapter. Sometimes it takes significant moments to give us a clue. For me, that clue came from my first moment alone with my first newborn in our hospital room, on the day he was born. As I've written so many times, the words burned into my memory, "Oh my God. I am a mother. And now I know." And by that I mean I was now tapped into part of the collective human experience with those who have given birth and those who call themselves "mother," and how very complex it all is. It gave me new empathy for my original mother, and the next move in that chapter was to find her to relay this to her.

I did not see complexity reflected in the advice given to one mother who wrote into the New York Times Ethicist column, penned by Kwame Anthony Appiah. Her daughter, whom she surrendered for adoption, contacted her. She writes, "To me, this child is akin to a distant, long-ago acquaintance." She doesn't want further contact, and asks, "What do I do now?" There are at least 5 main reasons why the answer she received was less-than-helpful.

This adopted person is not a child. It makes sense that this mother calls her daughter her "child," because mothers tend to do this whether their offspring is 2 or 92. Appiah's use of "child" isn't the same. Answering about why "adopted children" do what they do, he treats this adoptee like a baby. He suggests that the psychosocial developmental for an adoptee at age 7 might as well be the same at 47.

Controlling another adult's behavior isn't typically a viable solution. Appiah suggests to this mother that she "shouldn't let" her surrendered daughter "impose a relationship" upon their other family members. He vaguely implies there should be legal barriers to control an adopted person's choices, based on the wishes of others. He suggests that the adoptive mother should've controlled the adopted daughter's choices by withholding information from her. This is not how we should treat people.

Adoptees are not property; this adoptee agreed to nothing. There isn't one legitimate professional or ethical framework in existence that says two human beings get to contract for what a third human being does for eternity. Outside of some adoption laws reminiscent of the 1940's, this isn't even supported by law. In Pennsylvania, an adoptee has the right to petition the court to "open" their adoption at age 9. All pregnant adolescents are automatically emancipated. At age 14, a young person commands control of their mental health treatment, and can decline to share information with their parents. These are just a few examples of how the law empowers children beyond what Appiah implies should be permitted for this adult daughter.

Appiahs "political" doesn't belong in her "personal." This mother attempts, in a roundabout way, to state that she is a feminist. And although she seems to imply adoption was right for her and for some others, this doesn't mean she aligns with wanting to "encourage unprepared mothers to consider giving children up for adoption." From my work with the adoption constellation, I know the immense hurt these words cause. Encouraging parents to make adoption placements shouldn't be a thing. Parents need information to make whatever choice serves their child.

The language..... Curiosity. Biological. Unprepared. Children. Unnecessary. Generosity. Impose. Entitled. Obliged. These words are conclusions and judgements. And they're all so incredibly negative. It isn't generous (or not) to meet with another person. All people are made up of "biological" material--this doesn't make us insignificant to each other. "Curious" is not how I feel. Most adoptees are not children. Information about one's self is always necessary. No one has to be imposed, entitled, or obliged about anything. These words are the birth place of shame and guilt.

So what's the answer? It's to approach this as a normal part of human experience in life, instead of placing the experience in the swirling vortex of the adoption vacuum. Many of us have family members with whom we do not speak. A relative of mine is currently in "time-out" for telling me I am "a bad mother" because I comforted my child through a panic attack instead of punishing him for his outburst. I don't need a special law or to deconstruct someone's psyche for this. I wrote an email simply saying, "I can't be in your life anymore until you learn to apologize and to speak more kindly to my family." The end. And this adoptee hasn't even done anything wrong.


This mother already comes prepared with this answer. What she wrote in her question is her answer. "I have tried to come to terms with the idea of putting all this 'out there,' and I cannot." Although I would encourage her to challenge what she means by "all this" and "out there" when her husband and children already know of the situation, she has (for now) made her decision. She simply needs to set boundaries by communicating this with her daughter.

Fellow adoptees, I am not abandoning you here. I want nothing more than for every adoptee and their families to have just the right amount of embrace that fits them. But as I explained on a video on my Facebook page, when our parents who don't want contact don't tell us this, it creates a situation where your heart is open and out there without any of your needs being met. We then feel hurt and distressed, but we don't know why because we aren't being told the truth. And then we blame ourselves. This too is a situation where the adopted person deserves honesty. I hope the honesty is relayed with the compassion she deserves.