Adopted & Grieving: Forgiving Someone who Maybe did Nothing Wrong 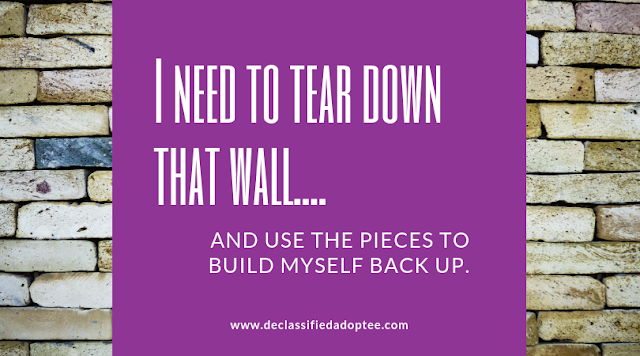 A little over a week ago, I received word that my (maternal, adoptive) grandma had artery blockages that would be addressed through a quick surgical procedure. Because I was cursed with some sort of sense for these things, I pulled my cousins into a group chat and urged them to go visit her if they could. I knew she would die before I could reach her. I did not have the heart to tell my mother who was already buying plane tickets to go help with grandma's post-op recovery. No one would make it in time. Within hours of sending that message, grandma died. The grandmother who was once my "schema" for what a grandma should be like was gone. And yet I struggled to feel anything.

Perhaps one person being the end-all and be-all of everything that is grand-parenting to a child is what set me up to one day feel so hurt and later feel so numb. She used to come to Grandparents Day at school. She had a tin of buttons that she let be comb through, endlessly. She would lay with me as I fell asleep so the grain patterns in the wood paneling of her guestroom, which I swore looked like animals and creatures, would not come alive at night to taunt me. She baked cookies, and hosted us all beautifully on Christmas. She had an enduring marriage that began when she was 16 and eloped with a Navy soldier. I would squeal with excitement when they would pull into the driveway to visit and watch from the window with hot tears on my cheeks when it was time to leave.

I was ten years old when I realized that my grandmother was human. She and my grandfather were entering their seventies at that time, and focused on retirement. Out of a number of options, they chose to sell their family home where my mother was raised. The purchased a small home about 8 hours away, just a few streets over from my mother's middle brother's home. There, he lived with his wife, the only male grandsons, and his daughter who is one month younger than me.

The decision was not real to me until we traveled to their sold home to help them back for their move to the north. I found myself grief-stricken and angry. The home I loved now belonged to someone else. They, per my perception, chose my three cousins over me. I knew that I would hardly get to see my grandparents after the move as I hardly got to see my uncle's family just the same. I was unable to move so much as a dish without feeling angry and ill. For my insolence, I was sent to my now-empty guest bedroom to adjust my attitude.

In that room, I cooked in what I thought was selfishness. I boiled and stewed in unyielding thoughts that I was being "unchosen" and abandoned. I tried to force myself to feel or think anything differently. I conjured the memory of grandma on my 5th birthday, which is still my most significant childhood memory. She  greeted me at my door that morning, palm thrust forward and all 5 fingers spread wide. "You are a whole hand!" she said. I felt a sense of accomplishment akin to that of a Nobel prize winner. On this new day, that memory gave me only another reminder of what I was losing.

As an even smaller child, I went on visits with grandma to see her father. He was a crotchety old man who refused the luxuries like running water. He said curse words and made me laugh. He had a wooden cabinet full of glass horses of varying sizes, poses, and colors. Selfishly, I wished he would give me every one of them. As grumpy as he seemed, his bitterness to the outside world worked deep into the earth of his vegetable garden, his goodness was inside those horses. I could feel it. They were sacred objects. Shortly before he died, he looked at me from his hospital bed as though I was the only one who would hear, and said, "Get me the hell out of here!" The wall he wedged between himself and others now trapped him in a place where he was tormented by being offered help he could not accept.

On "moving day" something inside me broke. Snapped. Shattered. If thoughts could burst and ooze like a wound, mine certainly did. With a bizarre sense of relief, I came out of the room and helped with the remainder of the packing. Although I did refuse to apologize, I wished them well on their way.

I did not have to pretend that it did not hurt me to see them less often. I did not have to pretend that I was unbothered that they attended my cousins' special and ordinary occasions on a regular basis. I did not have to lie that I did not care that my cousins rode their bikes to grandma's house, daily, to see her. I was genuine when I saw their artwork littering her fridge, nothing of mine to be found, my face unflinching. I was honest when I said I did not want to go to visit and when I begged to go home early when I did. I did not care that my cousin, into adulthood, called grandma to chat daily. I resented only the implications that were made that my indifference and lack of connection were because I intentionally did not care. I could not, emotionally, afford to care.

When grandma died, my mother could not talk on the phone for days because speaking made her cry uncontrollably. The more she cried, the more shame I felt for not crying. She eventually managed to call to ask me what things of grandma's I wanted. I did not know what to say, other than to ask for great-grandpa's horses. No one could find them. They were gone too--but I could not feel anything about that. I was conditioned against feeling anything, when it came to grandma. I could not grieve. I felt immense shame at the prospect of being unable to grieve. My numbness was guilt and my guilt just more numbness. Heartless, even. Am I heartless?

The wall I had built to keep my grandmother out now keeps pain in. This wall, and the experience and memory that built it, need to be deconstructed. I realize now that the only way to do this is to forgive someone who maybe did nothing wrong. There is even a guilt in needing to forgive someone who maybe did nothing wrong. She did not intentionally "unchoose" me. Her move had not even been about me. She did not know how the move made me feel, and did not anticipate I would feel that way. She did not know how I would perceive her or my cousins, aunts and uncles, for years to come.

Regardless, my hurt and pain from that fateful day were real and valid. It centered on her, and I need to forgive her for her part in what hurt me. When ten-year-old me was sent to the room to fix the way I felt, I did what I was told in the only way I knew how. I broke down. Built up a wall. I made sure to never, ever be in a position where anyone could make me feel that feeling again. I spent years avoiding that feeling and anyone who had the potential to make me feel it. I need to forgive her, for my own sake. thirty-three-year-old me now knows that there is no "fixing" the way I feel or felt. I need to tear down that wall and use the pieces to build myself back up. 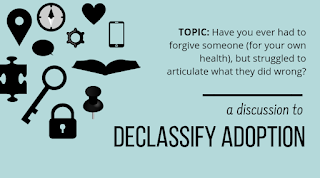 Let met know what you think in the comments section, down below, and on my Facebook page.

Have you ever had to forgive someone where you struggled to articulate what they did wrong to need forgiveness?
Location: Philadelphia, PA, USA