Is Being Transgender Just Like Being an Adoptive Parent? 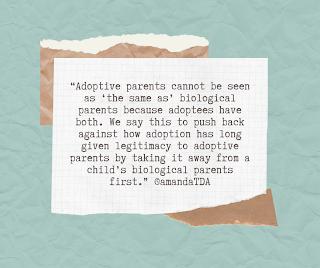 I am gardening a lot lately with all of my new-found time at home during this pandemic. Recently, I remarked to friends that I felt badly taking all of the beans from my green bean plant. Shouldn't I leave at least some behind? Many more experienced gardener friends chimed in to set me straight. A few fellow adoptees remarked, "Sounds like an adoptee thing."

I chuckled at this. It has always been interesting to me how metaphors or analogies that explain the adoption experience exist everywhere. We use these explanations to help us understand ourselves and to help others understand us. Still, it behooves us to always ask ourselves, how do I know my metaphor or analogy is helpful?

Recently, in an interview with The Guardian, Professor Sophie Grace Chappell made an adoption analogy of her own. She indicated that adoptive parents want to be seen as biological parents, therefore, adoption can explain transgender identity in this way. Among other notable credentials and achievements, Chappell is the only openly transgender Professor of Philosophy in the U.K. The interview was a follow-up to an open letter Chappell wrote to author J.K. Rowling.

Chappell's letter had been a solid appeal to Rowling to re-consider her vocal trans-exclusionary radical feminism (TERF). Chappell explained to The Guardian that Rowling's Harry Potter series "helped me come to terms with myself." Having enjoyed the books, Chappell was taken aback to find several Rowling statements about transgender people that "took [her] breath away," thus prompting her letter.

Let's Pause and go Over some Background

This may be helpful for some readers who are new to this issue. So, what is "TERF," and why are Chappell, myself, and so many others so upset with Rowling about it? In this article, Viv Smythe, the feminist writer credited with coining the term, explained how "TERF" came to be. At her blog, this was one definition of "TERF" offered,


"There are also those who argue that women-born-male can never share some of the most fundamental gender experiences that result from gender socialisation as feminine from birth through childhood, and thus can never be “real” women because they lack this shared experience."

I don't agree with TERF. I believe that the most powerful forms of disagreement accurately represent the arguments of the other side. I'm using Smythe's definitions of TERF here because I believe she strove to be accurate. This is seen in  how Rowling herself, who has been identified as trans-exclusionary, expressed her views in a now-infamous Tweet,

‘People who menstruate.’ I’m sure there used to be a word for those people. Someone help me out. Wumben? Wimpund? Woomud?

In this Tweet, Rowling critiqued the title of a Devex article, "Creating a More Equal Post-COVID19 World for People who Menstruate." Rowling seemed to take issue with saying "people who menstruate" instead of saying "women." According to Rowling, if you menstruate you ought to call yourself a "woman" as menstruation is exclusive to women.

However, the article itself was about eliminating barriers to menstrual health - particularly menstrual stigma. As a part of this, they clearly identified that "women, girls, and gender non-binary persons" menstruate. Using the word "women" in the title would not have achieved their goal of reaching all folks (for one example, some trans men) have a menstrual period.

On her blog, Rowling explained that she believes men, "natal-girls," and trans women as distinctly different. She even claimed that accepting trans women as women threatens the lives of cisgender women. Recently, trans writer and activist, Juno Dawson, published a piece with Time taking down this flawed way of thinking. Chappell's letter to Rowling offered a number of compelling points as well.

Back to the Metaphor

Chappell has utilized a number of arguments to refute claims made by TERF. Among those was an adoption metaphor that, honestly, took my breath away when I read it,


"Trans women are like adoptive parents, who want to be accepted as being the same as biological parents" (link).

Anyone familiar with my platform will be unsurprised by my breathlessness. I have spent the greater part of my adult life trying to center adoption on adoptees with full inclusion of all of their family connections. I have been outspoken against cultural norms that erase our biological (original) parents from our lives, popular culture, and literature. I have been instrumental in adoptees regaining access to their sealed original birth certificates. I refuted the "as if born to" legalese that says the only way I can legitimately be my parents' daughter is if my records are altered and sealed without my consent. I have consistently corrected folks who have called me "like one of their own" because I am "their own" without qualification, full stop.

I examined my reaction to this analogy to locate the source of my discomfort. I realized that, because of my position on adoptive parents, this analogy would therefore position me as invalidating transgender identities. And I am so very not OK with that.

It's important to me to be a respectful ally. So I dug deeper to look for more context to better understand Chappell's perspective. I found her submission to the American Philosophical Association entitled, "Trans Women/Men and Adoptive Parents: an Analogy." Therein she wrote,


"Maybe we should think of it like this: Trans women/men are to women/men as adoptive parents are to parents. There are disanalogies of course, and the morality of adoption is a large issue in itself which I can’t do full justice to here. Still, the analogies are, I think, important and instructive."

Her article then proceeds to discuss why this analogy is helpful. I appreciate that Chapell acknowledges that there are ethical shortcomings to the analogy. Here, I found better understanding and much to agree with. Let me name a few (but not all) examples.

There are, of course, a number of statements Chappell makes about adoption itself that I do not agree are accurate representations of this institution. But those disagreements are neither here nor there, for our topic. today. I may cover them at a later date if anyone is interested.

How Should we Make Analogies About Adoption?

Chappell is saying that biology is not the only factor that legitimizes who is a parent. Nor does biology legitimize who is a man and who is a woman. Trans women are women and trans men are men. I wholeheartedly agree. It's clear I agree with her premise, but do I agree that this is a sound way to use adoption as an institution within an analogy?

I would like to continue that discussion in a follow-up blog post. The reason I wrote this entry is because I became aware of Chappell's analogy through the adoption community in the first place. And I can see where it could be, and has been, misunderstood. As a part of my stance that the adoption community be good allies to the LGBTQIA+ community, I'm publishing my thoughts in response in a way that I hope will not cause harm and will subdue transphobia in my community.

There are several core components that I think all analogies involving adoption should have. I'll look forward to sharing Part 2 with you, and hearing your thoughts on those.

------------------------
Thank you so much for reading my latest blog post. If you prefer to listen instead, this episode is available on my Podcast, here. Want to comment, give feedback, or join the discussion? Head on over to this post on my Facebook page. Please feel free to share on your social media outlets.