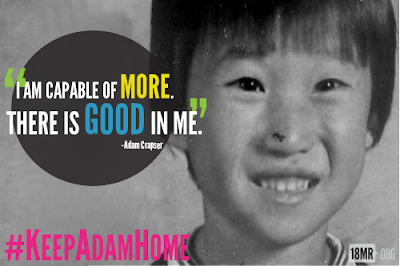 "Born. Adopted. Sealed. Denied!" was the hallmark chant of the Adoptee Rights Demonstration during my years attending and co-planning the demonstration as the now-former Vice President of the Adoptee Rights Coalition. The demonstration and its simple four-word message aimed to educate  legislators attending the annual National Conference of State Legislatures regarding a near 90-year-old legal practice that seals the original birth certificates of adopted people in all but 2 states and treats adopted people unfairly when attempting to access this certificate in all but 6 states. When we are born, we receive the same birth record as all other people. Following our adoption, this birth record becomes sealed and an amended birth certificate takes its place. A large portion of us are denied fair access to the original birth certificate as an adult--or denied access altogether. Born. Adopted. Sealed. Denied. But, what if I told you that the amended birth certificate--the record that claims your U.S. citizen parents gave birth to you in your state or country of origin at a date and time they were unlikely to so much as know you existed--is not enough to keep you from being deported?

For adult adoptees who turned age 18 prior to the passing of the Child Citizenship Act of 2000 (CCA), whose adoptive parents and agencies did not obtain U.S. citizenship for them, the threat of deportation is real. And ironically, that amended birth certificate that is otherwise imposed on adoptees as the "real birth certificate" and official confirmation that we are to move forward and forget about our countries, families, and cultures of origin, is not enough to save you from being sent to a country you haven't seen since childhood to be surrounded by people you do not know who speak a language you do not understand.

How did we ever come to practice something as heinous as deporting someone adopted to the U.S. as a child? According to adoptee advocates, adoptee citizenship and deportation is a decades-old issue given little attention. McLane Layton in her interview with Kevin Vollmers noted that inter-country adoptees once did not fit the federal statute definition of "citizen from birth." Layton is an adoptive parent and lawyer who was instrumental in the passing of the CCA. She approached Congress to have this definition amended to include adopted children as her own children were not given automatic citizenship upon their adoption.

The word children is key here. The CCA did not retroactively provide citizenship to adoptees who were already 18 at the time of its passage. In that same interview, Layton explained that CCA proponents originally intended for all adoptees to receive citizenship, regardless of their age, but were forced to compromise and exclude retroactive application for the CCA to pass. CCA proponents were unaware of how to quantify how many adult adoptee might be affected by this, Layton said. At a meeting I attended at Capitol Hill almost three years ago, Layton offered that the compromise was made to "give a choice" to adult adoptees to become U.S. citizens, or not.

Unfortunately, many of these adoptees do not realize they are not citizens until they attempt to obtain a driver's license, a passport, or a voter's registration. Notably, attempting these actions while not a citizen happens to be a crime these adoptees are forced to unknowingly commit. Adoptees like Russel Green and Adam Crapser carry out their lives, have children, and grow a beautiful family without realizing they are at risk of having it all ripped from their grasp.

The movement to rectify this issue is helmed by a small group of adopted individuals and their allies. Adoption agencies who facilitated adoptions during the time when automatic citizenship was not granted to intercountry adoptees have been virtually silent on this issue. Adoptee advocates have looked to the adoption lobby groups that represent these agencies, and organizations that purport to advocate for the best interest of orphaned, adopted, and fostered people--namely the Joint Council of International Children's Services (JCICS), the National Council for Adoption (NCFA), and the Congressional Coalition on Adoption Institute (CCAI)--but have been met with silence. Adoption lobby organizations tend to take action based on what their constituency finds important, which exposes an even broader systemic lack of empathy and societal ignorance regarding this issue.

Regard for choice does not explain the CCA's separation of adult adoptees from youth adoptees in who was automatically made a citizen because, in human rights terms, a person's autonomy is not defined by their age. What we have is a targeted group of people who must "choose" to become citizens despite not knowing they must make this "choice." Subsequently, they must spend thousands of dollars to secure citizenship for themselves in the face of possible deportation while having none of the rights and privileges that protect citizens that were promised to them by adoption.

Furthermore, being unable to quantify who is effected by a policy gap is never an excuse for that gap to exist. The inadequate tracking and reporting of adoption statistics--an issue in and of itself--is a chronic, over-used excuse to not attend to vital reforms in this institution. We've long been able to say "adoption has no problems" because we've opted not to record and monitor the problems.

At that same Capitol Hill meeting, I learned that some lawmakers may be hesitant to support an amendment to the CCA because immigration law permits non-citizens to be deported for committing certain crimes. In other words, this intersection of the adoptee citizenship issue and immigration law allows the U.S. to ignore its own constitution when passing down consequences to specific vulnerable groups. As the U.S. receives about 50% of the world's internationally adopted children, 81% who are children of color, 59% who are Asian, this issue disproportionately impacts and further marginalizes people of color which overwhelmingly suggests there are racist motivations for favoring and perpetuating this policy gap.

The age distinction and CCA's claim that all children are covered is misleading. Due to poor implementation of the CCA, today's adopted youth are not guaranteed citizenship if their visa type is not covered under the act and their parents or adoption agency did not work on their behalf to secure citizenship for them once in the U.S.

The look on a dear friend's face when challenged not once but twice by U.S.-born adoptees to join the fight for original birth certificates is emblazoned in my mind. "What if I don't have an original birth certificate to fight for?" For those of us born in the U.S., this is a reality for some of our peers born abroad. I realize as I hold brightly colored signs in demonstration,  as I testify, or as I speak privately to legislators that adoptee inequality is so much bigger than the aspects that I personally have experienced. It is in fact my privilege, my citizenship, that protects me when I voice an opinion in the interest of social justice that challenges the status quo.

The CCA is in dire need of an amendment to halt and prevent the deportations of adult adoptees--adoptees adopted in the past, in the present, and in the future. Currently, adoptee advocates wait for Senator Klobuchar to make good on her promise made last year to introduce such legislation. This amendment needs to happen, and it needs to happen now. Adoptee lives depend on it.