Shopping With a Soul: Why I Severed My Ties with LuLaRoe (Part II) 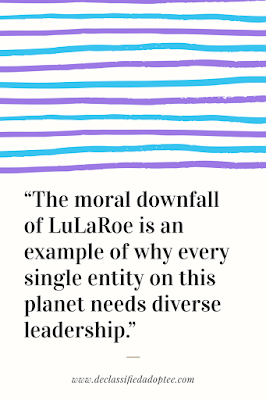 Yesterday, I began detailing just some of my concerning experiences with the cult company, LuLaRoe. I broke the post up into two parts after discovering I had much more to talk about than I imagined. Part I covered the concerning psychological atmosphere of the company. Today, I am diving into the cultural incompetence and outright racism, disablism, and misogyny.

As a LuLaRoe "Coach," I attended several LuLaRoe events for retailers and for leaders. My attendance was a requirement, despite not technically being paid. I began to feel physically ill at these events. It was to the point that I required multiple prescription medications to stand up without vomiting. This was due, in part, to the toxicity of the personal life experiences my business partner and friend brought with her. It was also because I continued to be torn apart at the seams between my growing financial obligations and my large team--and--seeing so many things that seemed wrong so with LuLaRoe.
Despite LuLaRoe having thirty women's styles, and only two men's styles, white upper-class men helmed the main speaking spots and direct advising of the company. One such advisor is outspoken in his critiques of Millennials--those of us now working age with families--as being "entitled." The tokenism was strong. Gay women got speaking opportunities to prove that the founder’s religious beliefs would not affect the company's service. Disabled women got speaking opportunities to tell able-bodied retailers, “If I can do it, so can you." Women of color in places of leadership and power were almost non-existent.

There was one such leader, my friend Angela whom I mentioned in Part I, but she was disowned by her entire upline leadership because she confronted a thread and subsequent comments, posted in her sponsor's Facebook group, that made racist remarks about Asian retailers. She was accused of "stirring the pot." She too recently cancelled her contract with LuLaRoe and has dedicated her business group on certain days of the week to helping other exiting retailers sell off their product.

The rapid growth and lack of intentionality of the brand has resulted in an accumulation of lawsuits. In what seemed to be an attempt to maintain their wealth while handling these payouts, LuLaRoe began coming up with “new” clothing releases almost weekly, and encouraging their retailers to spend more to have the latest “collection.” Like putting a bunch of re-dyed solid black items into a box and making it its own minimum order called "Noir." They changed their defects return policy for retailers to refund fifteen defects from their own pockets before LuLaRoe would reimburse them.

Worst of all, they continued cranking out prints at lightning speed which resulted in no filter for the racially offensive and culturally and artistically appropriative prints their artists drew. This included a “sock monkey” print, a black face Mickey Mouse print (which was also officially seen, approved, and licensed by Disney staff), and prints donning sacred items from indigenous cultures.

I finally realized that I needed to put myself and my values first because it is within my nature for these things to rule above all else. I ended my business partnership and soon after my business relationship with LuLaRoe. I forgave myself for ending my relentless need to “save” my business partner from her divorce which, I now understood, involved absorbing its toxicity (and that of LuLaRoe) into my own physical body and emotional body. And into my heart.

I took responsibility for myself, my feelings, and my behavior in choosing not to represent a company with depreciating values which certainly stem from privilege and a lack of diversity.

Not long after I left, a top-ranking retailer was exposed for refusing to help, or allow her customers to help, a deaf customer to see the sizes and prices in her live video. Despite having visual capabilities, the retailer refused to show the tag with the size when notified expressly that the customer was deaf. The retailer started banning helpful customers who typed the sizes into the comments section because it annoyed her. Despite a petition circulating in outrage and the clear violation of the ADA, LuLaRoe refused to terminate this retailer’s contract or even respond to the deaf customer’s complaint.

Most recently, LuLaRoe entered hot water when another retailer made gestures intentionally mocking individuals with intellectual disabilities, during a live sale. He issued a non-apology and then made a hashtag in support of himself to push back the “haters." This was brought to the attention of the National Down Syndrome Society to which LuLaRoe donates certain proceeds from its Scarlett dress. The “Scarlett” is named for Mark and Deanne’s granddaughter with Down Syndrome. The NDSS terminated their funding from LuLaRoe because LuLaRoe would not terminate the offending retailer’s contract. Not realizing the NDSS already announced their decision, LuLaRoe took to its Facebook page stating they ended their relationship with the NDSS because the NDSS would not accept the retailer’s non-apology which Mark and Deanne Stidham judged to be sufficient.

A true demonstration of cultural competency and sensitivity would be for Mark and Deanne to understand that they are not capable of judging someone's apology to a disabled person as "acceptable" or not. The only individuals qualified to accept or reject this apology are the people he mocked. Furthermore, when the NDSS said the apology was not OK, LuLaRoe's leadership should at minimum be culturally competent enough to know they are not qualified to disagree with the NDSS.

I don’t believe that “everything happens for a reason,” but I do think we can create reason from anything that happens. For me, my journey with LuLaRoe has taught me how insidious personally and culturally it is to feel trapped in a situation where an organization abandons its values and attempts to take you along with it. The moral downfall of LuLaRoe is a lesson in why every single entity on this planet needs diverse leadership. It provides real-life examples of how people are emotionally, mentally, and financially harmed when diversity isn’t a priority.

I supported this brand for much longer than I should have. And for that, I truly apologize to everyone whom LuLaRoe has hurt. No explanation. No excuses. Because that's what a true apology is.